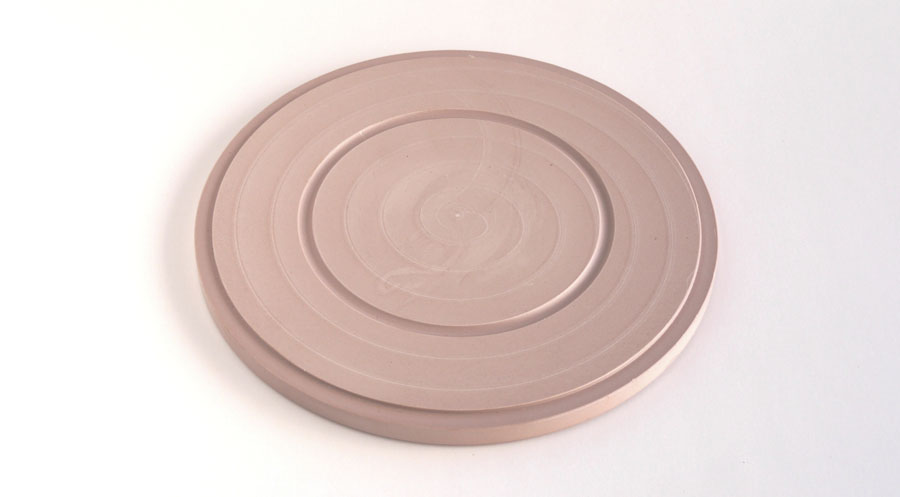 This is according to Dr Jean-Patrick Leger, the CEO of Vesconite Bearings, which makes the polymer load pads that are installed on railway bogies － the metal structures on which the rail wheels and axles are mounted and on which railway vehicles lie.

“What is interesting is that the samples are hardly worn at all,” he says.

“We see tiny areas where there is 0.1mm wear, but you can see the original machining marks and machine ridges on most of them.”

The Vesconite Superlube load pads have been specified for many years on Transnet’s iron-ore line locomotives, and replaced the original specified load pads that lacked sufficient load-carrying capacity and low-friction performance.

The Vesconite Superlube load pads have been made from an engineered polymer with a compressive yield strength of 54MPa and a recommended design loading of up to 18MPa.

This means that they can effectively support the locomotives without distorting or breaking − which is a considerable advantage when a weight of 28t to 30t is distributed on each axle of each locomotive.

This was particularly important because of the nature of the Sishen-Saldanha track.

This 861-km-long iconic heavy-haul iron-ore transportation route is largely straight but has ten crossing loops that trains travelling in one direction move into to allow full coast-bound trains, moving in the opposite direction, to pass where necessary.

These loops all lie on the one side of the track, and this results in very little turning motion along the length of the track, except at these very particular points.

What was experienced prior to the introduction of Vesconite Superlube load pads was that the locomotive wheel sets tended to run out of alignment when coming out of a curve and, due to the straightness of the track, the wheel sets remained out of alignment for considerable distances. This, in turn, resulted in track and wheel wear.

While an authoritative study has not presented the exact savings that resulted from the introduction of Vesconite Superlube, estimated savings are considerable.

Consider that, prior to the introduction of the Vesconite Superlube load pads, the bogie frame sometimes swivelled out of the bolster, and bogie wheel sets sometimes didn’t return to their original position for hundreds of kilometres.

With the train in the forward-drive position, this would have resulted in wear to the number 1 and 11 wheels, while other wheels would be subject to wear in the reverse position.

While various mechanical means, including packing under the springs, could be used to equalise the wheel load and keep the bogie height the same, ultimately wheel cutting would be required to ensure that the wheel diameters were equalised.

On many tracks, wheel life is reduced to a fraction of the intended life of six years, which they are designed for, as a result of frequent wheel cutting.

With costs of R40,000 a wheel, or R80,000 a wheel set, the cost to associated equipment can be considerable if the incorrect load pad is used, warns Leger

When the cost of wear to the track is included, the financial benefits of using the Vesconite Superlube load pads can add up to a considerable sum, he says.