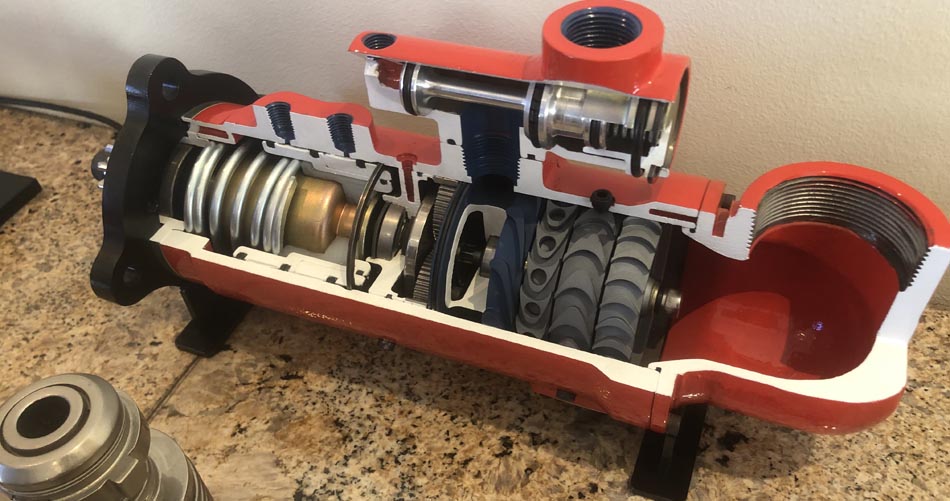 A 54%-per-component saving has been realised by Powerworks following the replacement of bronze bushings with a Vesconite low-friction bearings in the Jetstream turbine starters.

This is according to Powerworks Manufacturing Manager Philip van den Hoeck, who was responsible for the initiative to replace the bushing located inside a drive spindle that acts as a guide for the spindle.

He notes that the saving has been achieved without any loss in performance, as attested to by six months of in-house testing on a Detroit 6-cylinder engine, a dynamometer as well as on hydraulic test benches to test the efficiency of the motor.

Van den Hoeck confirms that the specific bushing is not subject to rotational wear in normal operation as it only moves backwards and forwards.

Vesconite was tested for this motion and no appreciable wear was measured, he says.

The bushing was also tested for rotational wear to verify that it performs even in the unlikely situation in which the pinion gets stuck, does not disengage and the starter starts to run together with the engine.

Since there are clutch teeth inside the housing, the latter scenario would result in the bushing running in the opposite direction to the shaft.

“We’ve tested it in house and we have run it in the opposite direction to see if there is an impact on it, which is not the standard application,” states Van den Hoeck, who notes that the testing confirmed that the bushing did not show wear even in this worst-case scenario.

On Powerworks and the introduction of the bushing

Since Powerworks is ISO 9001 accredited, an engineering change notification was compiled on all the items that were tested, as is required for ISO certification rules.

Powerworks has since introduced the Vesconite bushing as a standard component in its pre-engage starter motor, and had used it in 300 units by the end of May 2021.

The company manufactures the bushings in-house along with all other components for the 3000 rpm starter motor that has a three- to five-second starting cycle.