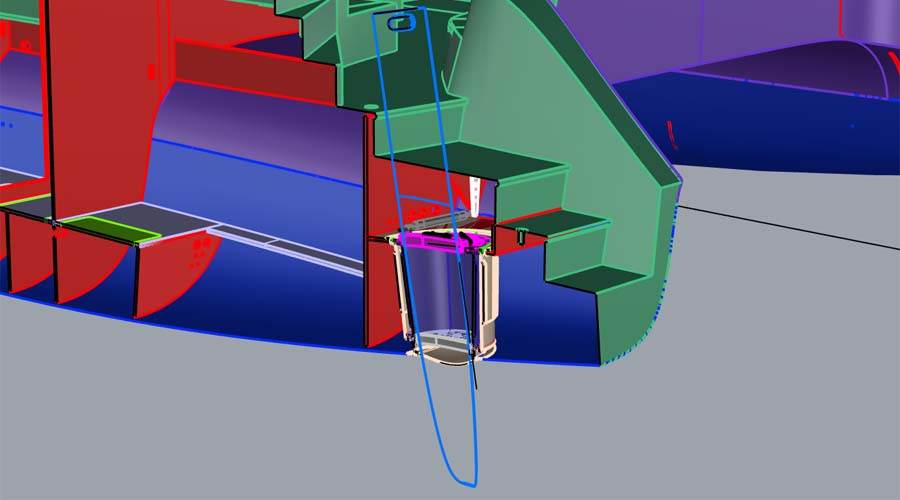 A Gunboat 60, which was refitted in New Zealand, embarked on a Pacific voyage in late April with newly-installed Vesconite rudder pivots acting as the advanced sliding bearing, allowing smooth and effortless sliding of the retractable rudders when sailing in shallow water.

Specialist marine engineering and design firm, Thorne Design, was contracted to improve the operation of the propulsion system that had been in place since the catamaran was originally built in 2014/15.

The design firm was employed to upgrade existing components and improve performance, including making the steering feel lighter, reducing the likelihood of failures, loading the system more evenly, and generally improving the way that the system works.

Part of the upgrade included the installation of a Vesconite rudder pivot that acts as a centre point in the retractable rudder bearing, which is described by Thorne Design owner Eliot Thorne as being a scaled-down version of a daggerboard bearing.

A high-performance sailing catamaran, such as the one that the rudder pivot was installed on, requires high-aspect daggerboards or rudders. Being long and thin, and with the loads generated, they require high-performance materials such as carbon fibre, titanium and Vesconite.

A catamaran such as the Gunboat 60 is capable of sailing at 25 to 30 knots and cruising in the majority of weathers at 15 knots. Because of the performance of the boat, and the comfort that it offers, the loads on the rudder are significant.

“Vesconite is one of the few materials that can deal with the compression loads that we are talking about,” says Thorne, noting that, for the installed bearing, up to 4,5 ton of load comes through the rudder system.

Complicating the design of the rudders and their bearings is the fact that many high-performance catamarans are used for cruising in the shallow waters around the South Pacific, the Caribbean or the Bahamas.

For the Gunboat that was refitted, this means that the existing fully retractable rudder system was maintained so that the boat is capable of exploring almost anywhere in the world, even in shallow waters thanks to the rudders and daggerboards being able to be brought completely up into the hull.

Vesconite also proved a good choice in this case since it is self-lubricating and its slipperiness and low coefficient of friction allows for the easy retraction of the rudder.

“The rudders can be taken completely out of the water,” explains Thorne.

“This Vesconite pivot acts as a centre point of the lower bearing,” he says, noting that there was corrosion, cracking and deterioration with the previous acetal bearings, which were fixed and operated as a simple slide.

“We wanted to create this pivot system so that the loads would be more effectively transferred from the rudder into the bearing. This avoids it being loaded unevenly and there will be no twist; this reduces friction and ensures that the helm feels light,” he notes.

“They just keep on working. Vesconite doesn’t bind over time, it doesn’t swell, it stays slippery and there is no wear,” says Thorne.

Thorne confirms that the changes to the rudder system of the Gunboat were made specifically for a particular Pacific voyage.

While Thorne Design had been conceptualising the design and engineering requirements for some time, the bulk of the engineering work was carried out in a month.

“Having the product available in New Zealand was quite critical in being able to make that happen,” states Thorne.