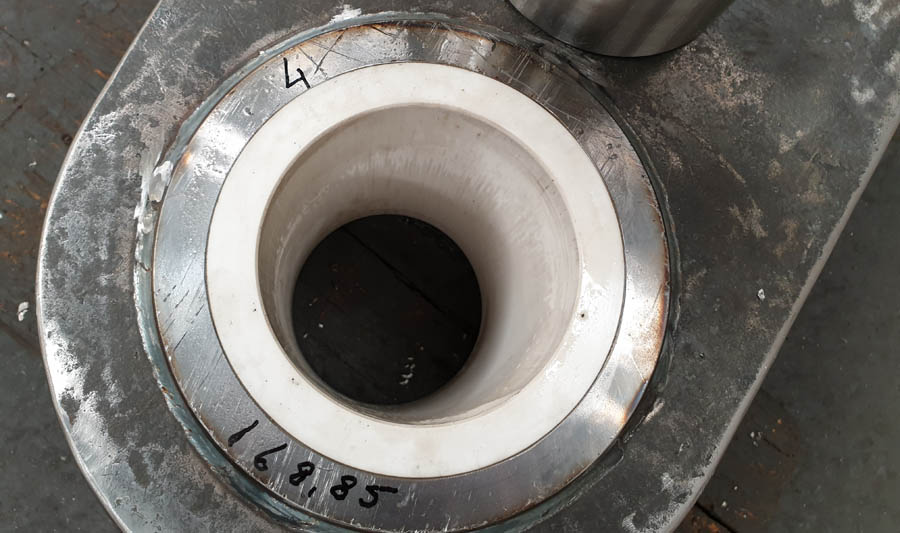 Fit and forget these bearings – for months or even years

There is one less thing for hydro engineers to worry about when designing dams.

This is if they choose Vesconite Hilube speciality polymer bearings – which can be fitted and forgotten about for months and even years.

This has been the experience of several engineers working on hydropower projects, including recent ones in North and South Africa.

The one in North Africa involved the installation of control arm linkages on the radial deep sluice gates on a hydropower dam on the Nile River seven years ago, while the one in South Africa, which is nearing completion, involves the use of Vesconite Hilube trunnion bearings on the tainter gates at the Kruisvallei Hydro Power Plant on the Ash River.

The engineers on both projects were particularly pleased with the fact that the bearings will perform reliably over many decades since they exhibit low creep, i.e. they do not deform under persistent mechanical stress. 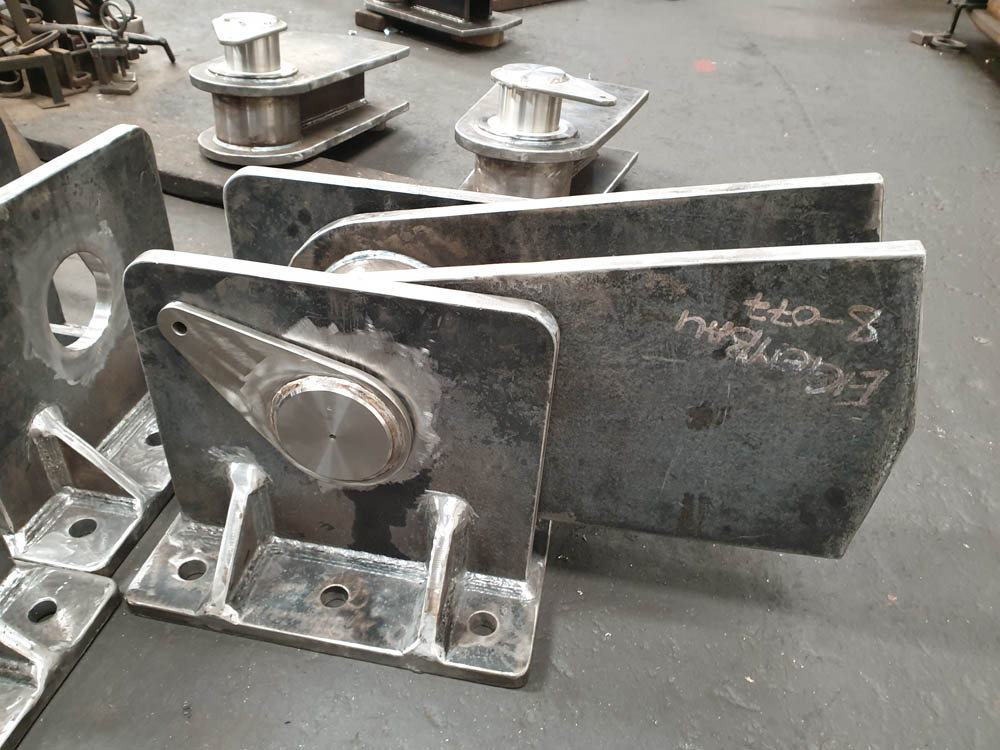 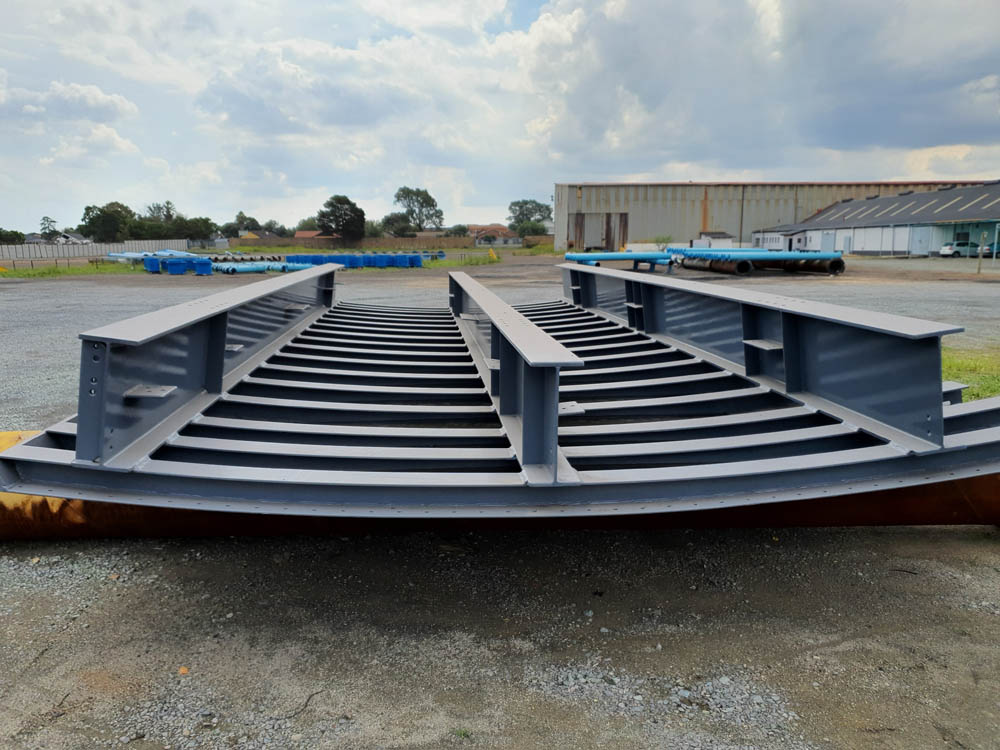 The manufacturing of the tainter gates.

Vesconite Bearings has undertaken in-house testing and verified that its polymer is unlikely to deform even where significant stress is applied over a long duration.

In a test exposing a predetermined Vesconite Hilube test piece to a 30MPa load over several days, no dimensional change was detected.

It is the no-creep characteristic that is particularly sought after in these hydro applications, since the bearings are fully statically loaded because of the significant water load that constitutes a large applied stress.

Vesconite Bearings engineer Juan Van Wyk notes that sleeve bearings that are manufactured from speciality no-creep polymers such as Vesconite Hilube outperform traditional roller bearings, for instance, since these are prone to brinelling or permanent indentation of the roller balls into the race of the bearing.

Another attractive feature of Vesconite Hilube bearings in hydroelectric applications is that they are swell resistant, since the speciality engineered polymer that they are made from exhibits a confirmed negligible 0.13% mass change after 28 days of being fully immersed. Vesconite also doesn’t soften under these saturated conditions; hence, its resistance to creep

This means that, where other materials may swell to the point where they do not allow for oscillation where this is required, Vesconite Hilube will reliably hold its shape and, in turn, its small clearances and allow oscillation when this is needed.

For Wicus Bonnet of Eigenbau, the contracting firm that is responsible for the hydro-civil, hydro-mechanical and power-house facilities at the South African project, this was ideal.

“The radial arm sluice gates that will be installed at Kruisvallei, and the associated trunnion bearings, which are located at the pivot point that allows for the movement of the gates to release or stop water flow, are a vital part of the project,” he says.

“They will be open most of the time – about 90% of the year,” he reveals of the gates, which comprise two intake, two tailrace and two emergency gates – one of each per plant.

However, operating flow of 37m3/s must be stopped and released during maintenance and emergency shutdowns, which is likely to take place between four and six times a year.

In addition, flow may also need to be stopped to protect against 1 in 200 year flooding and safeguard the hydro electro-mechanical equipment that could be damaged in such a situation.

Similarly, for the North African project, some eight bushes were installed on five 9.5m control arm linkages that link hydraulic cylinders to dam gates that are used to control the water flow along this part of the Nile River.

These were important since the linkage arms connect the sluice gate to the hydraulic cylinder and allow the gates to be lowered or raised with the water on the Nile to allow for optimal water volumes in the dam, which would otherwise risk being breached if the flood waters were not controlled sufficiently.

Besides low-creep and no-swell, other advantages of Vesconite Hilube bearings in hydroelectric applications are that they can be manufactured to any dimensions, which makes designing easier; they have a high load-bearing strength, so there may be a cost saving on bearing design since bearings can be made more compact while withstanding the force of the water; they have a low coefficient of friction, which minimises the forces on the structure during operation; and they are self lubricating, so they will not seize despite being stationary for long periods.

Van Wyk notes that Vesconite Hilube is ideal for high-load slow-speed applications, and it has been found suitable in hundreds of applications in various industries, including the agriculture, earthmoving, automotive, renewable energy and mining industries, among others.

In these industries, it is not uncommon to have slow rotational or oscillating movement every few minutes, days or weeks.

However, what is fairly unusual in the hydro-electric industry is that movement is so limited, and that oscillating movement may only be required half a dozen times a year, if that.

What is also unusual is the sheer magnitude of the force on the bearing, with the Nile River project calculating that each control arm had to carry 80t per arm and, with a safety factor of two worked in, the design engineer specified that each bearing needed to carry 160t.