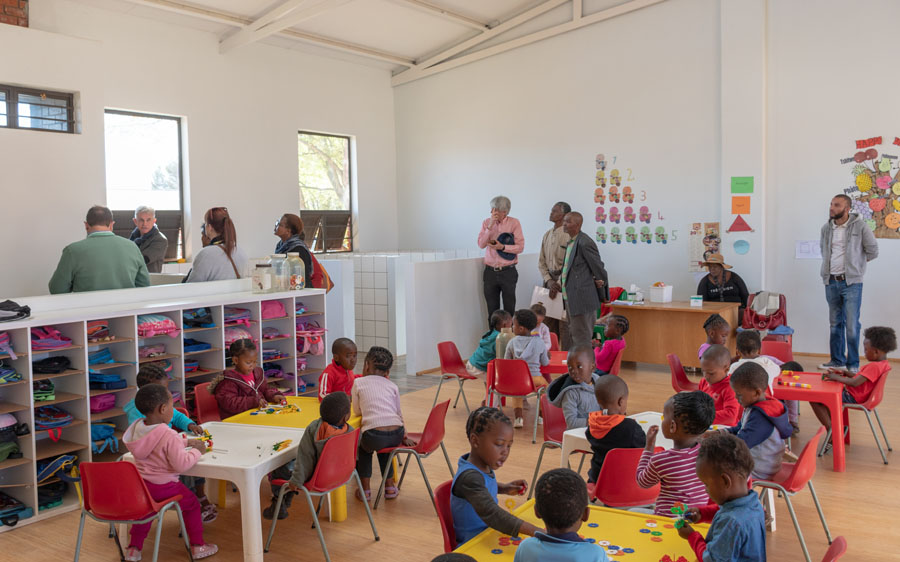 The architects for a day-care centre in Meloding Township, near Virginia, in the Free State, South Africa, were awarded a merit award by the South African Institute of Architects (SAIA) Free State on the 18th of October 2019.

The award, which was conferred on Krynauw Nel & Associates and EBESA Architects for the new classroom wing at the school, is regarded as an important recognition of new architecture and building techniques that could revolutionise South African and other school environments, according to the client, Vesconite Bearings.

Many schools in South Africa, and globally, are characterised by overcrowding, a lack of teachers and books, poor climate control, and a lack of facilities, among other problems.

Architects are often an overlooked component in the design of schools since they are regarded as an unnecessary expense, which pushes up the total cost of the project.

However, the day-care centre and the project initiator, Vesconite Bearings, have found that utilising an architect on a low-cost school can have tremendous benefits.

One of the biggest benefits of the architectural design has been the temperature control and insulation of the building.

Mhlahlo says that there is no need for heaters in the new classrooms, as compared to the old classrooms in which children congregate around heaters to stay warm.

In the citation for the project, juror Pieter Mathews agreed.

He wrote: “Passive design principles and technologies were employed to optimally counter and control the harsh Free State climate of Virginia.”

Vesconite Bearings believes that, besides the wonderful aesthetics of the school and the sense of opportunity, worthiness, freedom and an optimism about the future that are created by the innovative design, the school benefits from passive design principles.

The self-regulating nature of the building design results in energy efficiency and cost savings, since there is little expenditure on heating and cooling.

These design principles would be well worth implementing in other schools, since these are structures in which additional operating costs are undesirable, enthuses Vesconite Bearings, adding that the comfort of building users is another immense benefit of this style of design.

It is hoped that the SAIA Free State award to the Meloding project, as well as the project’s presence in the national-award adjudication process, will focus attention on the school and potentially act as a reference for other architects as well as school-infrastructure policy makers.