7,253 hours of printing with no signs of wear 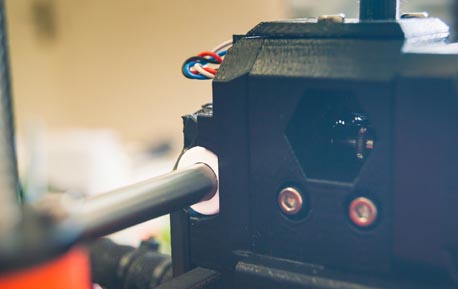 A company that sells South African computer components and accessories chose Vesconite Hilube bushings when the brass bushings on one of the owner’s 3D printers needed to be replaced. The owner, Deon Eksteen, has three 3D printers he uses to make components for local businesses and factories, as well as toys he sells.

When one of his printers’ bronze bushings wore out from a combination of use and the abrasive paste of lubricant and particles which formed between it and the shaft, he searched for a polymer bushing replacement for his XYZ Da Vinci 1.0A printer.

This was difficult in South Africa, where 3D printing is still establishing itself and where 3D printing stores and filament importers do not supply replacement components for that printer due to a lack of demand and support from 3D printer distributors.

Eksteen sought in vain through an online shopping app known for supplying the latest electronics, fashion, phone accessories, computer electronics and toys, but did not find replacement brass bushings of the correct size. Approaching various brass bushings suppliers was also unsuccessful as he was asked to place orders for more than 1,000 units.

Within five days of finalizing the order and verifying that Vesconite Hilube was appropriate for his needs, a courier dropped off the bushings, which were exactly made to specification. Eksteen’s 3D printer was fitted with the bushings and, in June 2018, had printed for 7,253 hours with no signs of wear on the bushings and the rods are still “super-smooth.” His previous bronze bushings had a life of 2,000 hours.

Back to Vesconite 3D Printer Bushings
Want to know more?