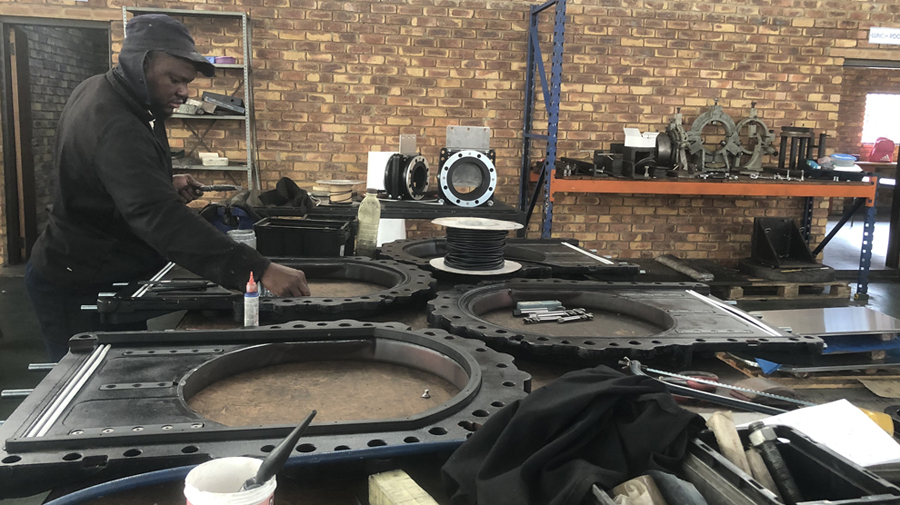 When Vesconite Bearings’ team visited knife-gate valve manufacturer A.C.Valves to fully understand how its client was using low-friction wear-resistant Vesconite polymer guide strips in knife gates, the company was manufacturing two valves for a South African gold mine that had experienced a break-down.

The 20” valves had been requested the day before and the mine’s supplier was due to pick them up on the day of Vesconite’s visit to the company, which can manufacture 200 – 300 knife gate valves a month depending on the size of the valve.

A.C.Valves director Collin Scott notes that the gold mine required two narrow-design Wafer Ring Flange (RF) bi-directional valves, which are A.C.Valves’ most popular design and the design that uses Vesconite as a guide strip.

The valves, which handle light and medium slurries, are relatively thin and are designed in keeping with mining company plant designs that require small compact plants.

The Wafer RF valves consist of two cast iron pieces with a stainless steel gate that lies sandwiched between the two. A PTFE rod with an O-ring acts as a scraper at the bottom of cast-iron valve halves and a rubber seal fits onto the blade.

Three Vesconite strips, meanwhile, are fitted on to the valve casing and act as guide strips, describes Scott.

“The Vesconite gives a longer life to the blade. It prevents metal-on-metal wear, which would otherwise result in scratches on the blade which, when it was retracted into the stuffing box, would cause leakages,” he elaborates.

Scott notes that he manufactures quality products that will not breakdown and cause downtime and unscheduled shut downs for unexpected replacements and maintenance.

His clients are aware that he has developed a product that is known for its quality, for its improved sealing, repairability and parts availability.

“We have had no complaints about the Vesconite guide strips and there has not been a case where the valve has failed due to the guide strips,” Scott continues.

“I have been using it for 10 years and it has worked perfectly,” he says.

Many of A.C.Valves’ customers are in the mining industry, and these companies would require robust knife-gate valves of different sizes depending on the size of their plants. They would need reliable valves that do not result in the loss of any commodity-containing slurry.

Other customers include those in the water industry. These also have demanding requirements since valves are specified to remain in situ and have no maintenance requirements for twenty years.

A.C.Valves was established in 1996 and specialises in knife-gate valves that are supplied to many countries in Africa, as well as Canada, Argentina and other countries.