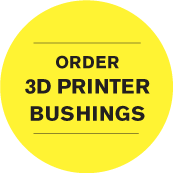 Any and all proposed replacements (V-Slot configurations, lead screw replacements, etc.) can be directed to vesconite@vesconite.com.

3D Printer Bushings Old Case Studies
UK bracket manufacturer selects Vesconite for 3D printer bushings
A UK manufacturer of brackets for electrical equipment has changed its 3D printer bushings to Vesconite ones. The company has Vesconite Hilube bushings installed on one printer and Vesconite Superlube, the lower-co-efficient-of-friction polymer bushing, installed on the other. The UK bracket manufacturer will also install Vesconite on future 3D printers as the business expands.
Innovator tests 3D printer bushings
Norwegian innovator Kent Thoresen used Vesconite Hilube sleeve bushings in his project to build a more reliable and less-noisy 3D printer. About eight years ago, he started 3D printing various parts for other projects and became aware of some clear weaknesses in open-source 3D printer designs. So, he started redesigning and refining his own 3D printer. Friends began to request his designs, as well as friends of friends; he continued to refine his designs, eventually building more than 200 printers for his network of acquaintances. His current printer assembly is stiff and dependable, an improvement over many of the low-cost, flimsy designs that are available. It is tough and technically solid, and does not require calibration if the plates are moved, unlike many of the less-sturdy, commercially-available designs. "The current design has been tested for almost 4,000 hours," said Thoresen in June 2018. "I will test it for 5,000 hours and, if I am comfortable with its performance, the design will be released to the open-source community. "After 2,500 hours, we also tested the bushings and there was no indication of wear," he continued. The bushings, along with the other printer components, were currently undergoing their final leg of testing in June 2018 and, if they proved themselves, were to be part of the final design. "We want to create a printer that is cheap, dependable, and will eliminate worries about wear," Thoresen noted. "Print jobs can take two to four days and I want to ensure that users can print continuously without having to worry about equipment failing or cost of the print time and the material used should there be a failure."
7,253 hours of printing with no signs of wear
A company that sells South African computer components and accessories chose Vesconite Hilube bushings when the brass bushings on one of the owner’s 3D printers needed to be replaced. The owner, Deon Eksteen, has three 3D printers he uses to make components for local businesses and factories, as well as toys he sells. When one of his printers’ bronze bushings wore out from a combination of use and the abrasive paste of lubricant and particles which formed between it and the shaft, he searched for a polymer bushing replacement for his XYZ Da Vinci 1.0A printer. This was difficult in South Africa, where 3D printing is still establishing itself and where 3D printing stores and filament importers do not supply replacement components for that printer due to a lack of demand and support from 3D printer distributors. Eksteen sought in vain through an online shopping app known for supplying the latest electronics, fashion, phone accessories, computer electronics and toys, but did not find replacement brass bushings of the correct size. Approaching various brass bushings suppliers was also unsuccessful as he was asked to place orders for more than 1,000 units. Armed with the dimensions supplied by a globally-recognized blog specializing in 3D printer conversions, Eksteen approached Vesconite Bearings and ordered 8 mm long bushings with the correct specification. Within five days of finalizing the order and verifying that Vesconite Hilube was appropriate for his needs, a courier dropped off the bushings, which were exactly made to specification. Eksteen’s 3D printer was fitted with the bushings and, in June 2018, had printed for 7,253 hours with no signs of wear on the bushings and the rods are still "super-smooth." His previous bronze bushings had a life of 2,000 hours.
I believe you have a great product!

I recently installed Vesconite Hilube bushes to my Bear printer in the USA. The bushes and printer have been performing faultlessly. I then removed the metal linear ball bearings from my Prusa MK3 and installed the Vesconite Superlube bushings. They are also spot on with no deviation on that set of rods. I believe you have a great product!

My order from Vesconite Bearings in South Africa arrived in Canada quickly and in great condition. The major concern with competitors is that they do not work well due to massive amounts of slop. Well, the Vesconite bearings don’t have that, which is amazing. The bearings aren’t as tight on the rods, but are far superior tolerance wise than competing bushings…by a lot. Whoever pointed me in the direction of Vesconite, thank you!

All I now hear is stepper motors and fans!

I have finally installed my Vesconite bushes. All I hear now is stepper motors and fans! Other movements depending on bushings are quite silent. Most of all, without any rattling sound at all. Plus, the print quality has improved. I'm very satisfied.

Over 6000 hours of printing with no signs of wear

We have been running trials with Vesconite Hilube sleeve bushings on 3D printers in Norway, to create more robust, reliable and smoother-operating machines. The current Vesconite Hilube bushings fitted to our test printer, have now exceeded 6000 hours of use and, on inspection, show no signs of wear. It is amazing how incredibly durable this material is. We are now looking at standardising printer bushing sizes and will certainly be using Vesconite Hilube in the future.

The Vesconite Hilube bushings ran smoothly with slight clearance when I tested them on the rods. I have now re-built the extruder with printed spacers to move the bearings 0.2mm further apart so they match the spacing at the rod end fittings. This setup is running extremely well so far.

I have installed the Vesconite Superlube bushings on my machine. After a small amount of testing with these bushings, I have to say I am very pleased with the outcome. The Vesconite bushings are doing a fantastic job! I would certainly recommend them to others in the industry.

My ears are very happy!

There's little to no torsional play in the bed of my printer since fitting the Vesconite Hilube bushings and I cannot see any deficiencies or print problems in my parts. They're as good or better than what I was getting before. Square parts are square and surface finish is very good. My ears are also very happy! I was printing in power mode the other day and it was only the actual motors themselves (and fans) that were audible. If I ever run into Z axis issues, I now know what I'm going to buy to replace those bearings.